Chang and Eng and Me (And Me)

A short performance for puppets in 3 acts

“There’s an image that I’ve carried around with me for the best part of 30 years. My brother and I read about it when we were kids…”

Tobi has spent most of his life with a weird, romanticised and probably quite orientalist image of the deaths of Chang and Eng Bunker – the original Siamese twins – in the back of his mind. He isn’t sure why. Recently he discovered that like him, they were of mixed Chinese heritage, and perhaps the first such performers to make it big in the West. In doing so they carved out an uneasy space in the rotten heart of the American dream.

Using puppetry, music and striptease, this is a show about diaspora, assimilation, and siblinghood; about what happens when you don’t know how to read yourself, and about reaching across history in search of a reflection.

Chang and Eng and Me (and Me) is part of a project exploring the difficulties and tensions inherent in telling the story of an unknowable Other or Others – in this case Chang and Eng Bunker, who were both marginalised and celebrated for their status as racial and physical ‘freaks’ in 19th-century America. At the same time the show explores Tobi’s experience of assimilation, family and unknowable diasporic memory in contemporary Britain. By thinking through both Chang and Eng’s, and Tobi’s biographies, the piece creates a space to examine contemporary concerns around identity and representation.

In this post-show discussion, Tobi Poster-Su will be joined by Jennifer Tang, Husam Abed and Martin O’Brien, makers and researchers who use auto/biography to create performance exploring questions of identity, to think through the possibilities and ethics of auto/biographical work. This will be followed by a short audience Q&A. 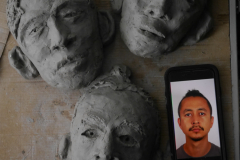 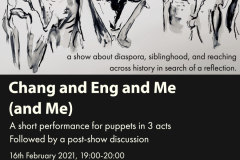 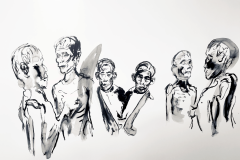 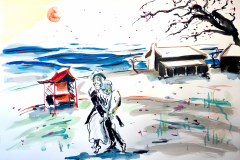